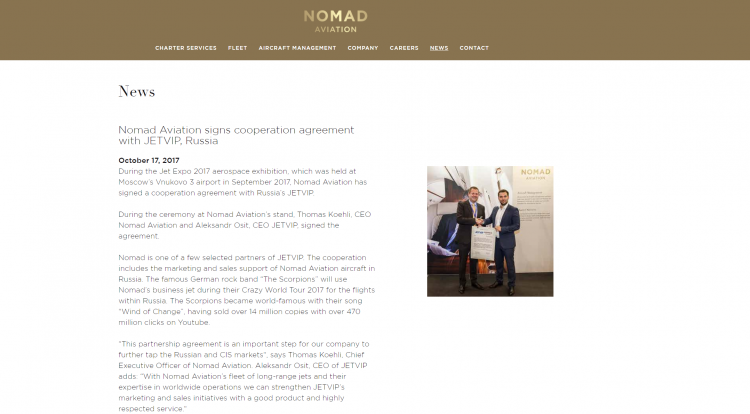 During the Jet Expo 2017 aerospace exhibition, which was held at Moscow’s Vnukovo 3 airport in September 2017, Nomad Aviation has signed a cooperation agreement with Russia’s JETVIP.

Nomad is one of a few selected partners of JETVIP. The cooperation includes the marketing and sales support of Nomad Aviation aircraft in Russia. The famous German rock band “The Scorpions” will use Nomad’s business jet during their Crazy World Tour 2017 for the flights within Russia. The Scorpions became world-famous with their song “ Wind of Chang e”, having sold over 14 million copies with over 470 million clicks on Youtube.

“This partnership agreement is an important step for our company to further tap the Russian and CIS markets“, says Thomas Koehli, Chief Executive Officer of Nomad Aviation. Aleksandr Osit, CEO of JETVIP adds: “With Nomad Aviation’s fleet of long-range jets and their expertise in worldwide operations we can strengthen JETVIP’s marketing and sales initiatives with a good product and highly respected service.“

Aircraft rental for the World Cup in Qatar

The current World Cup in Qatar, before it starts, is already turning into one of …